skip to main | skip to sidebar

Have you ever learned about something, and then not be able to get it out of your head? You're in bed, but have ideas running through your head so you can't sleep. I do some of my best work in bed.

I learned about peg looms the other day, including a site describing how to make your own. How to use one here. I wanted one immediately. I needed dowels to make the pegs, but didn't have any, and no way to get any. It has been crazy cold here, and I can't take Mom out in that. Foiled by the weather again! I kept thinking about it though.,

One night, I remembered. Several years ago, (six, seven?) I ended up with a box of chair parts at an auction, because I wanted the beautiful wood box the chair parts were in. Spindles, there were a lot of spindles in that box. Spindles, dowels, same thing, right? I scrounged around in the garage, found a 19" piece of 2x2, and several smooth spindles of approximately the same size. A couple of hours later, I had this. 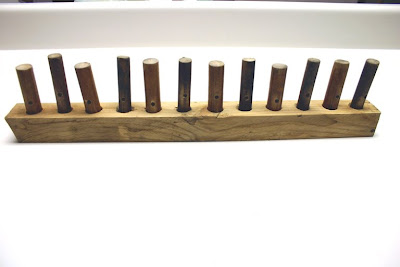 The spindles are wonky because they were slightly different sizes. The lighter, bigger ones are 3/4 inch. The smaller, darker ones must be 5/8 inch. The biggest drill bit I have is 1/2 inch. I also had a 1/2 inch and a 3/4 inch wood boring bit. The 3/4 inch wood boring bit made wonderful holes for the bigger spindles, but I had to improvise for the smaller spindles. I am not a woodworker. It isn't pretty, but I can't beat the price! It is functional, too. 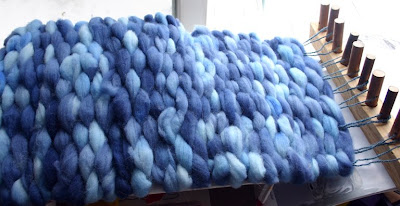 This is some domestic wool roving that I had dyed. When I ran out of roving though, I didn't know what to do with it. It was about a foot wide, and 1 1/2 feet long, and 1 1/2 inches thick. I decided to frog it. 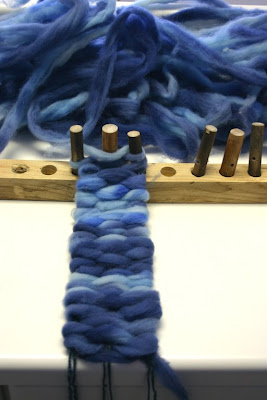 It will become a very long scarf. I split each piece of roving in half again, so it wouldn't be quite as thick.

When I can get to a store,(high winds and blowing snow today, I had to cancel my plans again!) I will probably buy some 1/2 inch dowels to make another loom, 2-3 feet wide. I see roving rugs in my future.

What a great idea! You are tremendously resourceful. I wouldn't have thought of that. I'm impressed! I can't wait to see your future rugs. Now I have this idea in my head...about making a peg loom...

have i ever told you you're my hero?

Make do with what you have. My credo and how I was raised. Those are gonna be some incredible rugs!!!

Claire, you should! It is tremendous fun. I was also eyeing some tree branches if the spindles didn't work out.

Rick, yes you have. You are too kind. Thank you.

Linda Sue, I'll try to get photos tomorrow. It is very long.

Cindy, I was raised that way too. But maybe that is obvious, huh?

The peg loom looks like something your mum could have a go on. When you've made your second one, you could both weave projects together.

I found this blog in my search for info on the peg loom. I can't get it out of my head either.

It is nice to see some 'close-up' pics of what the weaving actually looks like. Thanks!

I'm on my way to the hardware store to buy the supplies....then off to dad's to use his tools. Wish me luck....

I came looking for your blog posts about your peg loom weaving because I wanted to show somebody how you started and then progressed.

You have blown me away with your creations on the peg loom. Thank you for showing me what can be done with a bunch of little sticks.

Have a joyful day!

when the pegs are held in the hand, it's called "stick weaving" and goes back approx 3000 years.

If you want to make a narrower strip, try weaving it on darning needles with crochet thread. Finished strip is tough enough to be beaded for a necklace or curtain tieback.

Thanks for the inspiration. I did not have round pegs, so i made square holes for square pegs. I sandwiched 2 1X2 together and added a 1X2 inch spacer every 2 inches. Then made pegs by ripping the 1X2 in half and cutting into 6 inch pieces. Now I have a square peg loom.
After reading your article I went right to scavenging and designing cause I did not care to have a sleepless night tonight.

Newer Post Older Post Home
Subscribe to: Post Comments (Atom)
"It is a tragedy of the first magnitude that millions have ceased to use their hands...this great gift...It is highly likely that a time will come when we shall be so incapacitated and weak that we shall begin to curse ourselves for having forgotten the use of the living machines given to us by God."

Peace. It does not mean to be in a place where there is no noise, trouble, or hard work. It means to be in the midst of those things and still be calm in your heart. (Unknown)

Annie
Fiber arts enthusiast living on ten acres of fine Minnesota land caring for my Alzheimer's suffering mom, a herd of fiber llamas and alpacas, a couple of dogs, a few cats, some chickens...

Check out Mom's Art of Alzheimer's by clicking on the Art label below.